i just realized i haven't updated this thing in a while. i'd say i'm sorry, but i doubt anyone really cares that much... Anyway, i got a shit tonne of posters and what-not to scan, so stay tuned... Also, all the final touches for Distort Vancouver Fest Vol 7 have been made, so that will be my next big post.
What else??? i almost died with some crazy Inflammatory Bowel Disease, and i was knocked out for 2 weeks, played some rad shows with TOTAL WAR, still waiting on the MUNDO MUERTO lp after the test presses proved unworthy, working tonnes, sleeping none, and trying to get as much shit done as possible while still trying to hang out with the slew of out of town punks coming to Vancouver these summer days.
Anyway, i'll leave you with this. The full TOTAL WAR 8 track demo. The cassettes are finally out, limited to 100, professionally pressed, etc. if you want a real life copy, get in touch with me at distortvancouver@hotmail.com. Chances are though you're a fucking nerd who just wants the mp3's for your i-phone... and who can blame you? Anyway, thanks to Robert Collins of Terminal Escape blog for putting this online. 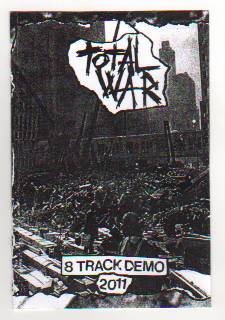