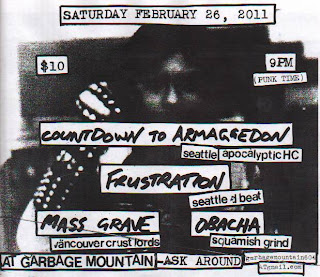 Here's another flyer i made for a show... Hesher's doing this shit, not me, but ya gotta keep the scene alive by helping your punk friends out!!!
COUNTDOWN TO ARMAGEDDON (spelled wrong on the flyer of course) have been around for yeeeeeeeeeeeeears now, and the last time they were in Canada was for Distort Vancouver Fest Volume 1!!! This was 7 years ago!! Anyway, they play a mix of epic crust, mixed with almost psych influences, and goth overtunes.
FRUSTRATION is a band i've yet to hear... i guess i've just been to lazy to check out newer bands over the internet lately, and i haven't had a chance to buy their 7" yet. According to Alan Despotic, they are the best band in Seattle right now. D-beat hardcore punk, featuring Mr. John Hurt playing drums... For those who don't know he drummed in STATE OF FEAR and CONSUME... His variation of the d-beat is perfect. Listen to any CONSUME record and try and tell me any different.
MASS GRAVE needs no introduction, especially if you've read past blogs of mine. OBACHA is the newer power violence/grind ensemble featuring WAR HERO dudes from Squamish.
This will be a great show!!!

So it's been a while since i updated this shit. February was meant to be a sober month for me, but as planned, i failed miserably. i started a new band with Hesher and Nick (UNLEARN) called TOTAL WAR. Our first show will be in May (hopefully), and (hopefully) we'll have a demo by then too.
Other than that, i just made a mix tape for Veronica. Thank you to my boss for laying me off so i can drink coffee all night and blast music til 3:30 AM and impress girls with my retarded taste in loud, annoying music that keeps my neighbours pounding on the walls for me to shut up!!!
Check this shit out, and make a tape that's better and send it to me:

side b
CHIXDIGGIT - i Wanna Hump You
CHIN CHIN - Even If It's A Lie
HAWKWIND - Space is Deep
CITIZENS ARREST - Burst of Silence
TRANZMITORZ - We Are All Alone With You
THE BOYS - First Time
KIDNAP - No SS
SEX PISTOLS - Seventeen
ZOUNDZ - Demystification
MUNDO MUERTO - Silencio
OLHO SECTO - Nada
ESKORBUTO - Anti Todo
NO HOPE FOR THE KIDS - No Hope For The Kids
W.A.S.P. - Animal (i Fuck Like A Beast)
SCREECHING WEASEL - Like A Parasite

Anyway, ya, if you're a nerd who likes making tapes (seriously, cdr's can fuck off), then let's do some trading!

Finally, Leg's from here just started up a new website that i think will be a good resource for the punk scene in Vancouver. Check it out for show listings, and random shit: http://thenthecopsshowedup.proboards.com/index.cgi