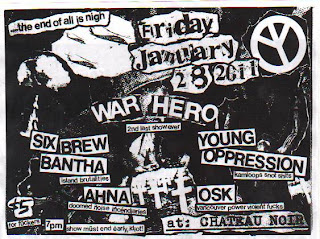 i just made this flyer now. i know, i know, better late than never. This isn't the typical kinda show i generally go to, but WAR HERO are totally solid buddy's, and they worked really hard at putting Squamish BC (a small mountain town 100 km north of Vancouver) on the punk rock map, taking what CHUCK NORRIS laid down 8 years ago and running with it. i think Squamish is the only place in the world where everyone prefers CHARLES BRONSON to DISCHARGE, thanks to these guys.
Also, YOUNG OPPRESSION are one of my favorite BC bands. Total snotty young hardcore punk, influenced by everything punk... but riding more on the ZERO BOYS end of the spectrum, while taking a lot of ques from UK82 shit. These kids, along with Justice (a rad dude who does a rad zine called Pissing In The Mainstream... check it out!!!), DAMNED GRAVE, Darryl (Kamloops' O.G crust punk), and the Little Big House, have created a thriving, fun, vibrant punk scene from absolutely nothing, in there interior of BC little town of Kamloops.
AHNA plays really noisy doom sludge, which really isn't my thing at all, but they do it good, and at times remind me of MAN IS THE BASTARD, which can be a good thing or a bad thing, but in this case i can dig it.
OSK are now a 2 man band continuing the power violence legacy, tipping a hat to SPAZZ, LACK OF INTEREST, etc. and doing it right. They got a new split 7" out now. if you still have a hard on for this kinda stuff, or a soft spot for 1996, then i recommend them.
SIX BREW BANTHA are the kids who seem to be ruling the crust/grind/punk scene in Victoria, BC. Really fun people to hang out with, and though i haven't seen them in a long while (at least sober enough to remember), i anticipate to see these dudes.
Anyway, props to Tommy Wilson for doing this show, and i'm stoked for it, and hopefully i can make it to Squamish the next day to see the very last WAR HERO show in some cabin in the woods with the mighty MASS GRAVE.
Anyway, see you Vancouver punks, power violence weirdos, and Squamish freaks Friday.
STAY ACTIVE//STAY PUNK. TAKE CONTROL OF YOUR FUCKING LIFE.
Posted by CHARGED//DISTORTED at 5:00 PM