it's been a while since i updated this thing. Lots of really rad shit has happened since i got wasted and slagged on that shitty CD i reviewed here (thanks REAL PROBLEMS for taking my drunken rant against you guys with a grain of salt... if more people had your attitude i'd probably be punched in the face by people i hardly know a lot less frequently).
i don't even know where to begin. Vancouver has a new punk run jam space/show venue (albeit limiting it to 2 shows a month) called Garbage Mountain, which a bunch of us built shit for, and actually got off the ground. instead of talking about how cool it would be to have a space (which i've been doing for 10 years now), we finally fucking did it! Upping the punks!!!! Mad props to Roger and TEMPEST for actually taking the plunge and the brunt of most of the work!!!!!!
We had our first show there last night, and it went off without a hitch. MASS GRAVE killed it as usual, and the space was packed with punks, skids, and hard core kids. Fucking sweet, and i can't wait to have dear friends MUNDO MUERTO pack that place on January 15th!!! Arrrrrrrgh!!!!

Got a lot of rad shit as of late. The DISARM 2xlp discography (took forever cuz of a shitty postal service, but damn it was worth the wait! Thanks Jocke!!!), SISTA KRIGET 7" (raging Swedish Kang? you know this asshole is gonna love it), LOST TRIBE cassette (Shraven of AGHAST hall of fame kicking out some bumming goth punk? Fuck ya!), DEATHRAID all life ends lp (sorry nay sayers and shit talkers... these are the fucking masters... the song Lay Down All Hope alone makes this record worth it with it's grooving rock n' roll riffage!!! And the last song, Smothered makes me wanna shot gun a beer and kick a hole in a wall everytime i hear that fucking intro!!!), and cassette demos of LA raw ponx MATA MATA and KRUEL (which kill as well).
Also, Amelia sent me the new tracks for the CERVIX tour cassette, and it is a notch above their last tape (see review in an earlier post), and seems tighter, and you can hear the bitchin' riffs a little better... i think this band will savagely destroy the west coast in January, so if you get a chance catch the fucking brutal onslaught of noise, reverb, and Japanese worshiping puuuuuuuuuuuuuuuuuuuuuuuuuuuuuuuuuuuuuuuuuuuuuuuuuuuuuuuuuunk.

i also saw some amazing shows. WARCRY devastated our unworthy fucking city last month. Obviously. Unfortunately, BURIAL got turned away at the Canadian border, angering me even more about how we are so close to the US, but that stupid imaginary line keeps us from seeing kill bands like BURIAL, CRAZY SPIRIT, MAUSER, DEATH RAID (and on and on and on and on...).
BLACK MOUNTAIN at the Commadore was insane too. i don't normally like smoking weed, but figured what the fuck, i'm at a big rock concert and a girl is passing around a joint.... And holy shit, i started tripping balls when Steve McBean started throwing down the sickest, catchiest, saddest yet happiest riffs i have ever heard. it's like BLACK SABBATH possessing NIEL YOUNG for fucks sake!!! The opening band, THE BLACK ANGELS were amazing too... it felt like i was watching HAWKWIND Space Ritual, in 2010. Total epic, weird, psychy, and totally not contrived (which is why i HATE bands that claim they are psyche in 2010... sorry, retards, but it takes more than a beard and plaid shirt to make awesome music)... Anyway, a killer night, and props to my old friend Chris for getting me in!!!
KYLESA played here too which is always fun to hang out with them, and drink all their band beer and whiskey, and end up barfing out of a moving cab while shooting the shit about CRUCIFIX, VOID, and DISCHARGE with Steve McBean. Oh, and go off about hating CONVERGE in front of their sound guy... Sometimes i wonder how i don't get beat up more often than i do...
Finally, KILLING JOKE played here last week, and duh, it ruled. if your one of those wieners who's to cheap to pay $20 to see one of the most influential, and talented, and amazing bands ever, well, you deserve to miss the epicness of this evening. i'm doing a whole review for the Skinny magazine here, so i won't go off about it. But thanks to Tanya for getting me in, and fuck you to the douchebag security guards who kicked me out for sodding them off when they flashed their lights in my face.

i'm going to Calgary tomorrow for the holidays. Food, parents, cable television, dancing at crappy hipster dance clubs with punks... i'm actually pretty stoked for it... But not as stoked as i am on these shows coming up, and seeing some really awesome friends that i don't get to kick it with half of much as i want to: 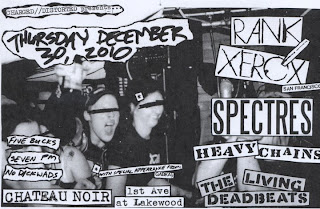 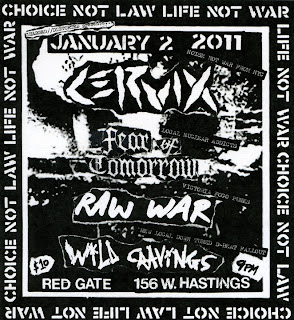 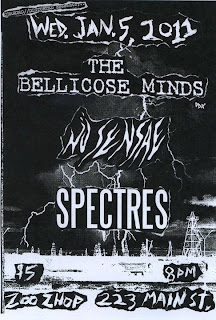 And of course on January 15th: MUNDO MUERTO, NOMOS, THE MEN, SPECTRES, and FEAR OF TOMORROW @ Garbage Mountain. i will get that flyer on the go soon too.

i leave now rocking the Strangers In The Night live 2xlp by UFO. Fuck ya!
'Til next time, up the punks, don't trip, and be excellent to eachother.
Posted by CHARGED//DISTORTED at 8:38 PM