Cleaning my house can suck it...

i should really be cleaning my filthy messy house (that's been left in shambles since before my trip to Varning, when the fine gentlemen of SEPTICK SYSTEM spilt many a beer on my floor while watching Fubar... actually, it was probably mostly me)... But fuck it, there's punk records to listen too, and reading columns in the new MRR where they talk about people they made out with more than they do records, has sickened me to the point of taking matters in my own hands so the 3 of you who look at this thing know how awesome my record collection is.

A recent trade i did with the same dude who got me the LAS SENORAS 7", also got me this record here: 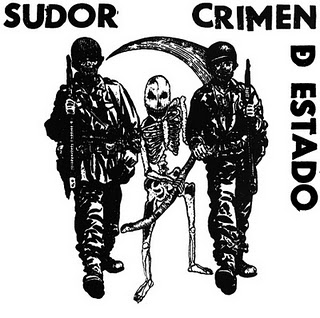 This is a split between, duh, SUDOR and CRIMEN D ESTADO, both hailing from Spain. Lately i've been feeling a little lame, with the excess of international hardcore punk i've been rocking, where i can't understand a single lyric! Over the years i've tried to teach myself different languages, usually of the origin of my current favorite records, but either get frustrated, or just move on trying to learn another language, hence actually learning nothing! Maybe while i'm laid off this season, i'll actually take a course... i'm thinking Swedish (influenced mostly by Eddie Meduza youtube videos, and my obsession with TOTALITAR and anything Jallo related). But i digress.
Both bands solely yell in Spanish (hence my little off course rant). Honestly, i kinda missed out a little in the hype of Spanish hardcore in the last couple years, aside from the like of INVASION, DESTINO FINALE, and a few older bands like UVI, ESKORBUTO, RIP, etc. It was probably dumb on my part, but i get sick of reading the same reviews about the same bands that half the reviewers probably didn't listen to, they just saw someone cool from MRR digs it, so they cut and paste what they wrote so they don't look uncool or something. Ugh, again, i digress.
SUDOR fucking rip. They play mid tempo, rocking d-beat... i'm talking Ain't No Feeble Bastard or A Look At Tomorrow speed (riding the floor tom, lots of 16th note high hat hits)... in fact, the chorus of the last song "No Te Escucho, No Te Miro, No Me Hables" pretty much IS the chorus for Ain't No Feeble Bastard. Throw pissed off Spanish vocals over this shit, and you will have a happy Foat. i've just listened to this 3 times in a row. Catchy rocking punk riffs, nice stops with just vocals, and a sweet punk recording with raw slightly distorted vocals.
CRIMEN DE ESTADO offer 5 really raw punk songs. This reminds me a bit of WRETCHED with their faster scissor-beat kinda tunes, then it switches gears to mid tempo rocky shit, and then fast MOB 47 style d-beat. The recording leaves much to be desired and i think this woulda worked a little better as a demo, not a split with a top notch band like SUDOR. To top it off the guitars are out of tune, which is a little annoying... though if they were more blown out and distorted i would probably let it pass... i can see what they're going for, and i know i like it, but it misses the mark for this d-beat snob. i would like to hear more in the future though.

That's it. time to mop the stale month old beer stains off my floor. And annoy my poor neighbours by blasting UNCURBED.
Oh, and just a disclaimer, i have absolutely no beef with Maximum Rock and Roll. i still find it the best punk magazine there is... But like any community based zine or project, there will be shit i object too. Just like some punks probably complain about how there's too much music nerdery in some columns, i complain that a few columnists don't even write about punk!!! Like Juls' column... it's great you had a boyfriend when you were younger... But what does that have to do about the punk scene at large??? Oh well, to each their own... i'll just flip to George Tabb, the interviews and the reviews and quit complaining!!!
Up the punks.
Posted by CHARGED//DISTORTED at 10:00 PM